This is my entry for the Arts Council Salt Spring Island charity auction back in 2010.
Thought it might be fun to have another look. For this sculpture “Chairabundus” I used two of the chairs shown on the left.

All of Ganges it seems 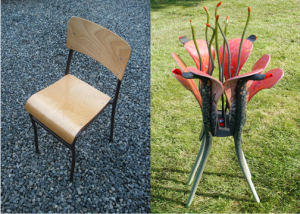 went a little chair crazy last May (2010), with a weekend auction of simple plywood
and metal chairs transformed into Art by a who’s who of over 60 Salt Spring Island
artists.

In 1805 the Lewis and Clark Expedition Corps of Discovery were low on supplies and traveling rapidly down the Columbia River, intending to meet one of the last trading ships of the season, hoping to secure needed supplies and to send back journals and specimens home as requested by President Jefferson. On November 10, 1805, a severe winter storm struck the area, forcing them off the river for six days and preventing them from meeting the supply ships. The group landed in a cove on the north bank of the river that Captain William Clark called in his journals “that dismal little nitch.” After the storm passed the company moved to Station Camp on the west side of Point Ellice, and camped at that location for 10 days before relocating for the winter to the location of current-day Astoria.

In the 1870s and 1880s, Joseph G. Megler operated a fish buying station on the east side of Point Ellice in Clark’s “Dismal Nitch”, and it in time became known as Megler Cove.

Ready to start planning for the upcoming year? To begin with, here are five straightforward elements of a daily plan: 1. Start each day with a simple, eloquent plan like “I am painting today.” 2. Create a daily mantra that you use to keep yourself on track. It might… 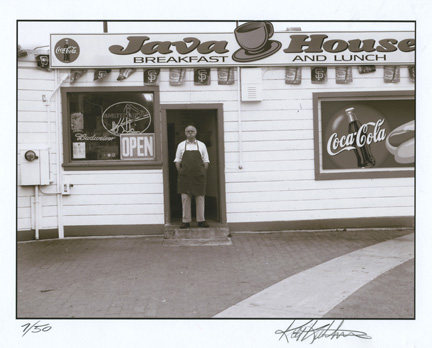 My grandson,West, thinks my “Xochipilli” mug is a cricket. At 2 1/2 years old, he’s already thinking creatively. My design for this image was inspired by the Aztec god of dance, 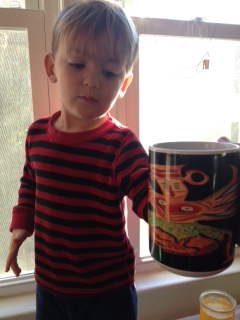 . It is interesting that the Hopi’s have a deity “Kokopelli”, the god of fertility, child birth, and agriculture. Coincidence?

According to Patheos “Kokopelli has been connected to various other gods over the years, most notably to gods of the Mayans and the Aztecs. The theory that Kokopelli is related to the Aztec god Xochipilli (sometimes spelled Xochopilli) has been popular since the 1960′s, and is one of the reasons that Kokopelli sometimes has his name spelled Xochopelli.
The biggest problem with the theory is that the Aztecs didn’t exist as a distinct civilization until 1250, and pictures of Kokopelli date to at least 700 CE. The two gods are both agriculture and fertility deities, but Xochipilli carries a whole list of attributes that never show up in the Kokopelli petroglyphs.”

What ever is going through his mind, I’m glad I can help to inspire West’s inspiration.

Welcome to my revised Blog site. I hope to show you what I’m doing now; new projects, and new art. At the moment I am getting an art store together. It’s at Society6. It’s a new venue for me . Still learning how to put my images on a curved t-shirt or coffee mug ; a whole new set of design challenges. Here is a new item that I just uploaded. Some of you might remember these from a few years back. They were water soluble oils with pen and ink on water color paper. 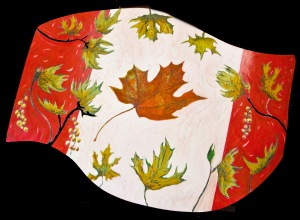 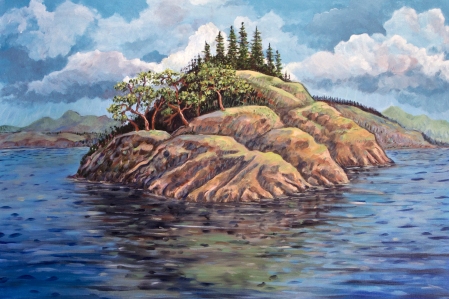 24″x36″ Acrylic on Canvas “The Point” is on Prevost Island in the Southern Gulf Islands, BC Canada. This bit of land is actually called Selby Point. 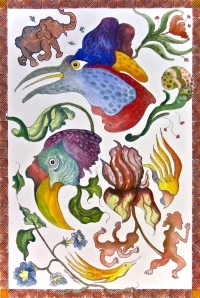